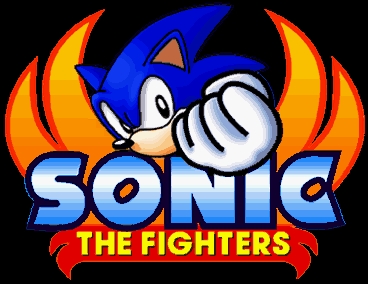 Perhaps Sonic's most unusual genre-bending, Sonic the Fighters (also known as Sonic Championship) was designed by Sega's premiere arcade R&D department -- AM2 -- as a somewhat simpler and more animated take on their tried & true 3D fighting formula. The object was to attract those who didn't previously take much of an interest in fighters, namely young children and female players. Like most Sega fighters, the game implemented a simple three-button attack system. Punch, Kick, and Dash, with all other moves being combos of these three. Noticably, there is no "defend" button. Each character has shield Barriers...these Barriers can be broken with special moves (similar to the Fighting Vipers armor system). Once all Barriers are broken, that character can't guard again until the next round.

Although it got a fairly wide release in Japan, Sonic Championship (as it was known over here) was very minimally received in US arcades. It almost didn't make it over at all, because Sega of America was at the peak of their utter stupidity phase at the time, and they thought the game was "too violent" to be associated with Sonic. Might not as well have, as you'd be hard pressed to find a machine at even the most elite of arcades. A Saturn conversion was long planned, but never came to fruition. It looks pretty hopeless by this point, and a Dreamcast version is very unlikely to say the least unless its revealed in a second jam title. The most we can hope for is StF's inclusion in some future collection (like Sonic Jam), although no such collection is planned as of now.

It's possible to get remotely aquainted with StF's fighting style through Fighters Megamix on the Sega Saturn. After completing the "Muscle" round, Bark the Polarbear and Bean the Dynamite become playable characters. From what I can assess, the gameplay is similar to Virtua Fighter, only on a much simpler level. Combos aren't as complex or flashy, and hand-to-hand combat is easier in general. (It should also be noted that the characters can literally run up walls...) Of course, I'm not about to try and rate the entire game based off of Bark and Bean in Fighters Megamix, but I've brushed around the edges enough to speculate that most amateurs and newcomer fighting fans should enjoy it, but hardcore VF otaku probably won't find anything to write home about.

No sooner has Robotnik's Death Egg been knocked out of the sky than the doc begins construction of a superior model: the Death Egg II. Tails' transformable reconnaissance robot locates the machine in outer space and relays images to Tails' base. Our fox buddy throws together a spaceship to reach the Death Egg II, but there are a couple of problems: the ship requires power from the eight (yes, there are eight in this game) Chaos Emeralds to launch, and it only seats one. The Emeralds are scattered around the planet, in the possession of eight "guardians". One each with Sonic the Hedgehog, Miles "Tails" Prower, Knuckles the Echidna, Amy Rose, Nack the Weasel, Espio the Chameleon, Bark the Polarbear, and Bean the Dynamite. Sonic and Tails meet Knuckles on Floating Island to determine the best course of action. Knuckles points out that, since there's only room for one, only the strongest should go. Of course, he decides that he's the logical choice, and demands that Sonic give him his Chaos Emerald. Sonic, not being particularly fond of Knuckles' methods, prepares to start a fight. Just as the two are about to go the rounds, however, Tails interrupts the brawl with an idea: they hold a fighting tournament to determine the strongest one fair and square.

Sonic The Fighters was rereleased on PS Network and XBox Live Arcade. One major change is the addition of Honey the Cat, which was never put in the final version before.
﻿