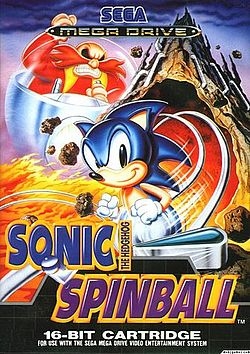 Looking for a challenge? Sonic Spinball is by far the HARDEST Sonic game on ANY system! Created in November of 1993, Sonic Spinball is an adventure/pinball game in which Sonic tries to free his friends from Robotnik's Veg-O-Fortress. This game is also a VERY significant landmark. People often say that the Archie Comics hold NO place in the Sega world. Well the further you go in this game the further characters you see from the original SatAM cartoon ( Note that this game was created by Sega Technical Institute and NOT Sega Of Japan) - including Princess Sally, Rotor The Walrus, Bunnie Rabbot, Robotnik's cluck bots, An actual roboticiser in action, as well as introducing Hip and Hop The Kangaroos and a cameo of Scratch from the "Adventures Of Sonic The Hedgehog" cartoon. There are only 4 levels to the game but they are LONG and get EXTREMELY frustrating the further on you go! Consisting of The Toxic Caves, The Lava Powerhouse, The Machine, and one of the hardest Sonic Zones ever created on any Sonic game period - The Showdown!!! Good luck, you're gonna need it.

Robotnik's latest scheme is to turn all the innocent citizens of Mobius into evil robots...at lightning speed. Using a high-tech, super-efficient robot factory hidden in the active volcano, Mount Mobius; utilizing the energy produced by the magma that flows through the volcano's tunnels. The Veg-O Fortress, as it's known, is guarded by a dangerously new "Pinball Defense System". Only one too-cool hedgehog has the wits and the moves to break the defense and get at the heart of this metallic prison...Sonic the Hedgehog!!!

If you've played Sonic 2's Casino Night Zone, then you know what this is like. As hard as this game is, it can be beaten WITHOUT a game genie. However unless you don't want to see the outside world for quite a while I suggest you get very ready to handle this game! The object is to get the Chaos Emeralds that Robotnik is using to power up is fortress. There are 3 in the first two stages and 5 in the rest.
﻿