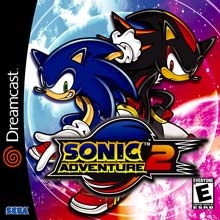 Besides featuring a great game overall, SA2 really allows you to play the game any way you want, much like the best of the 2D Sonic games. It does this with an incredibly well-designed replay system featuring tons of variations on level selects and a wide variety of emblem games. There are 5 missions in each level, and you get a ranking for each one you complete. E rankings are easy to complete for even a beginning gamer, and A rankings are a challenge even for a master.

The basic concept is that you play 2 differet sides of the same adventure - Hero and Dark. Hero Side includes Sonic, Tails, and Knuckles, with Amy as a non-playable story character. Dark Side includes the now-playable Eggman, and 2 new characters, Shadow The Hedgehog and Rouge The Bat.

Dr.Eggman's grandfather, Professor Gerald Robotnik, had worked on a top secret project for the military agency GUN over 50 years ago. Dr. Eggman, in his Egg Walker, breaks into GUN headquarters to discover what the weapon is. He finds a black hedgehog named Shadow who has an incredible resemblance to Sonic. After they escape from the military facility, Sonic is captured by GUN. He escapes and finds that he has been mistakeen for Shadow, who calls himself the "Ultimate Life Form" and shows off his ability to manipulate time with "Chaos Control." Sonic is recaptured by GUN but then rescued by Amy and Tails, who is sporting his new upgraded Tornado model. Meanwhie, Knuckles wards off a jewel thief by the name of Rouge The Bat who wants the Master Emerald. Eggman shows up to steal it himself, but Knuckles breaks it instead. And all this is in 4 levels.

Sonic Adventure 2 has been rereleased for XBox Live Arcade and the PS Network in October 2012. In the new release, it is now HD (720p) with also the addition of leaderboards. It can be purchased for $9.99 on PSN and 800 MSP for XBox Live Arcade. For an additional $3/240MSP, you unlock the Gamecube version.

It is noteworthy that in this rerelease, there is no new way to migrate your chao in or out of the game. Those features have been entirely taken out.