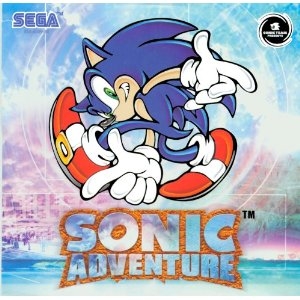 Sonic Adventure is Sonic's MAJOR leap into 3D as a launch title onto the Sega Dreamcast.

Dr. Eggman is after the 7 chaos emeralds to unleash the power of Chaos, who Dr. Eggman believes will help him attain his goal of world domination. Sonic and Tails aim to collect the emeralds first to keep them out of Eggman's hands. Meanwhile, Knuckles is on the hunt for pieces of the Master Emerald, which was shattered when Chaos was released, so that he can restore it and Angel Island. Unwittingly involved is Big The Cat when his best friend Froggy eats Chaos' tail as well as swallows Big's chaos emerald. A bird escaping from the Egg Carrier collides with Amy, who decides to protect it at all costs despite being continually chased by Zero. The wild card of E-102 Gamma as the robot who helps Amy and eventually turns against Eggman rounds out the 6 players. Throughout their adventures, Sonic, Tails, Knuckles, Amy, Big, and Gamma are shown various images of the past concerning chief Pachacamac of the Knuckles Clan, his daughter Tikal, the chao, Chaos, the Master Emerald, and the 7 chaos emeralds. Those images are key to understanding Chaos, the danger Chaos truly represents, and ultimately the way to defeat Chaos.

This game is the first Sonic game that had the ability to raise virtual pets called chao. Chao get special abilities, looks, and increased stats when given animals or special fruit. The chao are raised in special gardens (or the VMU) and can also participate in races. More information can be seen here. 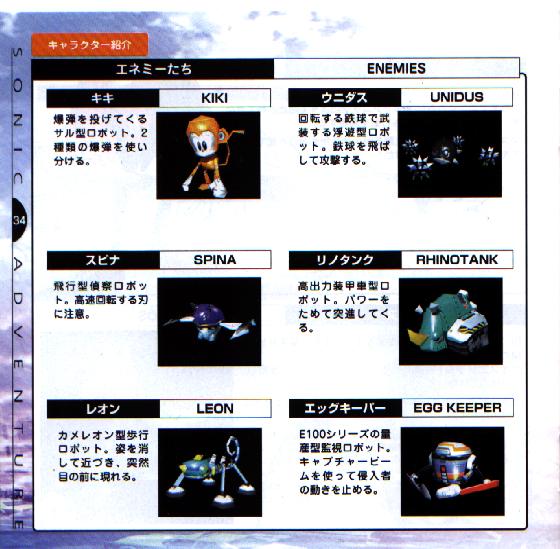