Why is there no Sonic Anime Comic Adaption?

Wonder just why Archie can do a Sonic Adventure adaption, but not take the time to do an adaption of the anime? Sonic fan, gamer, and artist Micheal Stearns takes a good and insightful look at just why we won't see one and lays down some facts as well.

Wonder just why Archie can do a Sonic Adventure adaption, but not take the time to do an adaption of the anime? Sonic fan, gamer, and artist Micheal Stearns takes a good and insightful look at just why we won't see one and lays down some facts as well. 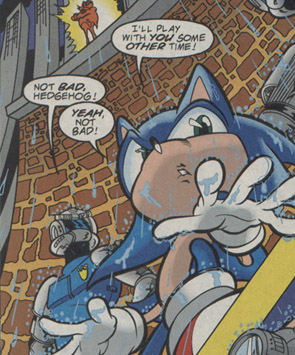 With the Sonic Anime now availible in a frighteningly bad English dub to everyone with $20 and an Electronics Boutique, the question has come up more than once, will there be a comic adpatation by Archie? It certainly seems possible, comic adaptations of movies are being made all the time, or at least I remember that Archie did one for the Teenage Mutant Ninja Turtles movie to compliment their own TMNT series. An interesting thing to note about that is that they made no effort to adapt it to their more cartoony running series as they've done with Sonic... But there's no sense getting off track in the first paragraph! Ken Penders has gone on record to say that there are no plans for an adaptation. Why is that so shocking?

Because the Sonic Adventure adaptation practically paved the way for it, although by accident I'm quite sure. Notice the entrance to the "City of the Ancients," anime fans? It's the island Sonic and Tails are hanging out on at the beginning of the Sonic Anime? There's no way that's a coincidence, I can assure you of that. ^_- Now that we have a whole city full of humans (Overlanders, if you insist..), the two important human characters in the anime could show up quite easily, and with that mountain being so full of bizaare physics (Ever read Greg Bear's "Eon?"), there's plenty of room inside for an abandoned human civilization and a base for Robotnik to be located beneath the human's city. With that as the setting, it's easy for Robotnik to come to the surface, kidnap the president's daughter, and the whole sequence of events in the anime fall into place. And with Silver Sonic set to make an appearance in the near future--no doubt inspired by his cameo in Sonic Adventure--it seems only natural that Metal Sonic would be in for something similar, and what better than the anime that revolves around him? It might take a little bit more doing than the whole "Black Eggman" thing to convince Sonic to "help" Dr. Robotnik, but we've made a few small changes already, a few more won't hurt. Knuckle's role might be significantly different as well, as would some of the locations. 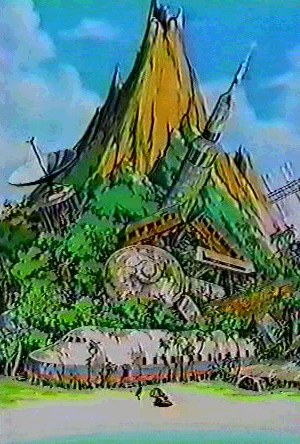 But on the whole, what we have here is a very smooth conversion, especially compared to Sonic Adventure. So why no adaptation? We'll probably never see an official reason, but you can bet it boils down to money. ADV is selling this story for $20, and if Archie starts selling it in comic form, it will be considerably cheaper. In that sense, the two would be competing with each other. Maybe that's not exactly the reason, but something to that effect sounds pretty believable to me. And if you want to be less cynical about it, there are creative reasons as well. When adapting a movie to a comic, there's very few changes that need to be made. The difference between a movie's storyboard and a comic book is almost nonexistant, so all the people at Archie would be doing is redoing what the people who made the anime did years ago. Compare to the Sonic Adventure adaptation, which not only requires massive storyline changes to fit into the Archie continuity, and like any game-to-comic adaptation, you have to fill the gaps as well. You can't just have Sonic run from point A to point B to advance the plot. The substance of a game isn't in the story, it's in the playing. But the substance in a comic is the same as it is in a movie: Story, and a bit of visual punch. And take into account the sheer amount of planning they've been doing with the Sonic books anyway. There really isn't room. The existing stories are incredibly short (I have been assured Fleetway fans have it far worse ^_-) to make room for ad space and the Knuckles stories that have been dumped into the Sonic books, and they certainly don't need another story intruding on what little space they have left. A Super Special might not be out of the realm of possibility though..

So if there were to be no Anime to Archie Adaptation, don't feel dissappointed about it, because from this viewpoint, you really don't need it. If you want to know what it would be like, you should be able to use your imagination. And if you want the story, just buy ADV's release. If nothing else, if ADV makes a lot of money on that, it's a lot more likely DIC will be interested in producing more with Sonic, and will show fan support for Sonic far better than an internet petition ever could.