So just what do fans think of the rumor of Rotors departure and impending robotization? Not all are peachy keen on it as Archie fan Trevor Lake shows us... 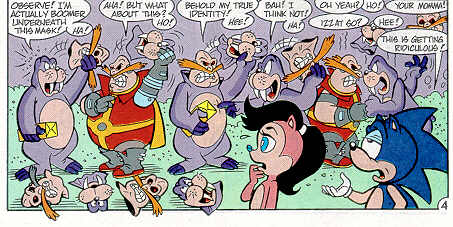 Rotor Robotcized? I Really Hope Not.....but Archie might end up doing it anyway, in all their 'infinite wisdom'.

This is in response to part of the Editorial Challenge question. Hmm..... if Rotor was Roboticized, would I read the comics anymore? Well, I'm kinda undecided on that right now, but I've heard people say stuff about what they'd do if that happened, ranging from 'so what?' to 'I'll burn my comics.' While that's a little strong, I wouldn't really blame someone who would stop reading the comics personally. But on to the real stuff I have to say.

Now, since Rotor left in issue 72 and we haven't heard a peep from him since, nor have anybody else ever asked, "I wonder what Rotor's up to?" or anything even remotely close to that, people have realized what Rotor had in him: A charming quality and a unique trait for a techno; a personality and doesn't act like a total geek. Due to this, he's extremely well liked and respected by most of the characters in the comic. And now, he's gotten that same respect from most fans of the comic. However, he seems to have had a good amount of that in the first place. It only took 3 issues without any activity from Rotor that fans started to grumble. I think Dan Drazen said something like this in his Review of Sonic 75: "Instead of 'I Am the Eggman', this story should've been called 'Where is the Walrus?'" That might not be the exact quote, but you get my point, right? 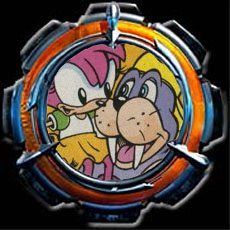 Now to try to drive all this home. If you read the comic, you probably have an opinion on this whole situation. Well, I asked a lot of people about it over the past little while about it (sorry to everyone for being the resident pest on this recently), and they seem to want him back desparately, especially because of the one they tried to replace him with, Nate Morgan, who, for the most part thus far, has been a complete flop with fans. But I don't blame Nate. Oh, no. I blame Karl Bollers, the foolish one who tried pulling this stuff on us all. When they first yanked Rotor out, Archie thought no one would really give a damn about it. Dead wrong. No Archie's getting questions fired at them concerning his return. For those of you who don't already know, Rotor's been my favorite character in the comic for about 2 years now. And now, here I am, finally about to submit my first editorial on this.......

I'll leave off by saying this: If Archie roboticizes Rotor, it will be a damn shame, and an unforgivible waste. I probably wouldn't stop reading the comic, because I need to keep up with something Sonic, but I'd be extremely PO'ed.

Thank you, and good night.

Well, Rotor has been gone for a while now and it seems someone has started to fan the flames of fandom turmoil, asking if the happy purple dude will get 'boticized in the near future. And frankly, it's a good thing they did, because it will give us a chance to prepare ourselves for his loss. Remember back in StH #47? When they suddenly dropped Sally to her "death"? That got a heckuva reaction from the fandom, namely because they didn't see it coming. Same deal with Lupe in SSS #13. Why use these as evidence for Rotor's "demise"? Simply: precedent.

Recently, we've been losing alot of characters to Egg-Botnik. We've lost Valdez, Lupe, and if thought about the right way, most of the Robians. (yeah-yeah-yeah, they've already been 'cized, but they were essentially taken over again). And while they weren't lost to Robotnik, we've lost Valdez at the hands of Espio, and we're on the edges of our seats (some of us) wondering what will happen to Queen Acorn. For the past 6 months or so, we've been subjected to a great deal of loss. Rotor is very likely to befall the same fate. 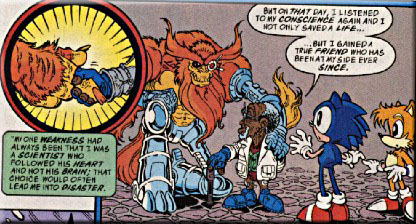 Another matter is Nate Morgan. While they may not have meant to do it, he's Rotor's stand-in. Stop booing, I know how you feel. Look at it: they're both physically odd-ducks. Rotor was much larger than the others in all accounts, and definitely stood out in a crowd. Nate's a pint-sized Overlander. They're both tech-genius', and they are both well-liked by the FF. The big kicker is that Rotor was limited. He learned and did things on the fly. What do you expect? He was a teenager growing up in a global war. He ain't gonna know everything exactly. Nate, however, is age more than a fine wine and knows exactly what he's talking about. When Nate isn't sure about something, it's like a scene from Star Trek when the ship is in peril and the focus character of the episode says, "Well, maybe if we do..." They trust a hunch, and it works, and they get a happy ending. Nate serves the same mind-numbing purpose.

With Nate filling the active void Rotor left (note I said "active", not "spiritual" or "emotional"), and with the long run of losses recently, it's a safe bet that we won't be seeing Rotor in the flesh in the future. He went to find his family who disappeared in the coup. Lupe did the same, roughly. That's all she wrote, folks. The fat lady is tuning up for her final number. The only way Rotor might get through this intact is if he disappears into the dusty back corners of some writer's mind. We'll miss him, but at least we'll know he's not a bot.

Hmm.... I just looked at Ian the Potto's editorial response, and maybe it's time for me to say a few things brought up on that.

Lupe, Valdez, and several others have been lost to Robotnik over the past while, yes, but I do see two ways to look at this whole thing. Ian's way, as a pathway for Rotor's demise. Or looking at it in the way that these guys are small potatoes compared to the act of roboticizing Rotor, an original character in the series with a lot of likeness and respect throughout the Archie comic fandom. 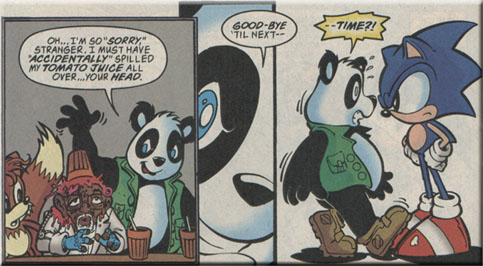 Personally, I don't think this is Nate VS. Rotor. No way. The two have already collaborated together excellantly. They've already shown they can work together with great ease. Nate can be made a great character, but he's gotta stop being Rotor's stand-in and be his own self. Plus, Nate's been made a plot-filler, and a not-too-great one at that. Examples: He happens to have a Super Emerald right when they need it, he made the Power Rings(Supposedly). He happens to know the police chief in the City of Ancients. Nate can be a good character, but he's gotta stop being this stupid plotfiller and start to make a character of his own.

Abilities. I don't think comparing Nate and Rotor's abilities is such a great idea. Nate's a senior citizen. I think he tought Uncle Chuck. Of course he's gonna know more than a teenager. Rotor's a prodigy, who hasn't even come close to realizing his full potential, honestly. And that will take time. And that's where Nate comes in, for me. These two can teach other so much, they come from such different backgrounds that they can teach each other immensely.

But more than anything, this is about what the fans want. We're the ones reading this comic. And the vast majority of we fans don't want to see Rotor roboticized. You need proof, take a look at the polls on the SHQ News Page and see the results thus far. If Archie is not both deaf and blind, they should see that roboticizing Rotor would be a big mistake. Ian has said the spectulation about it would prepare us for it should it happen, and 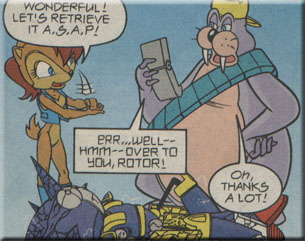 I perfectly agree there. It would help us overcome the initial shock. But the fact is, if he was roboticized, there would some very PO'ed fans out there. But it also won't do for him to stay in limbo forever. They need to bring Rotor back in my opinion, and I think a lot of fans agree with me.