A more lighthearted editorial - Sonic Team, perhaps the backbone of Sega Enterprises, are always full of surprises. First, they will create a game that will definitely boost Sega's sales, and then they will create another game which will cast doubts into the hearts of people. Two such examples, as Cuisinart king shows us, are Sonic Adventure and Chu Chu Rocket! 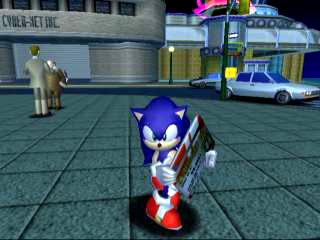 A more lighthearted editorial - Sonic Team, perhaps the backbone of Sega Enterprises, are always full of surprises. First, they will create a game that will definitely boost Sega's sales, and then they will create another game which will cast doubts into the hearts of people. Two such examples, as Cuisinart king shows us, are Sonic Adventure and Chu Chu Rocket!

Sonic Team, perhaps the backbone of Sega Enterprises, are always full of surprises. First, they will create a game that will definitely boost Sega's sales, and then they will create another game which will cast doubts into the hearts of people. Two such examples are Sonic Adventure and Chu Chu Rocket.

What else can be said about this game besides its popularity, fantastic graphics and excellent gameplay? Sonic Adventure is a game that brings back the 'legacy' of the blue hedgehog after some years of failures. If this game failed too, then Sonic will probably become another antique, cast aside and thrown into the bins. Fortunately, this was not so when Sonic Adventure came in as one of the top games of the year. Just after Dreamcast debuted in the market, Sonic Adventure was issued as the backbone of the white console, which crush three million polygons a second and possess a 128-bit graphic processor. The game which became very popular in Japan and Asia became a prized possession in the United States of America.

Why is the game so immensely sought after? Buy a Dreamcast if you don't have one, and grab a copy of Sonic Adventure. Insert that gigabyte disc into the console, and start playing the game. After ten minutes, you will be glued to your seat, ignorant of any pleas or cries from your friends and relatives. Your eyes will only stare at the television set, or maybe at the blue hedgehog himself. You will gasp when you realise how big the world of Sonic can be. You will be astonished at the high quality graphics used in the game than those old fashioned 32-bit Playstation games. After playing Sonic Adventure, is that all? NO! There is Internet capability in Sonic Adventure which allows you to surf into the Sonic Adventure webpage, where you can download all sorts of things, including those blue Chao. Contests are held periodically, and Chao trading is common there.

Sonic Team has definitely created the best game for the Dreamcast so far, and it boosted the sales of Dreamcast and Sega's shares. Sonic Team is the saviour of Sega Enterprises, the money machine of Sega Enterprises, and the master over video games. When September came, they announced that they were creating another game! Everyone had hoped for NiGHTS 2, but it turned out to be a new, unfamiliar and perhaps, a childish game. The game was Chu Chu Rocket, and it meant that if the game managed to appear in the market, both Sonic Team and Sega Enterprises would be riding on the jagged rocks of doom.

Choo choo train, or choo choo rocket? The title suggests that it is a really childish game, fit for people under the age of nine. A game like that would appear in the Dreamcast and made by the famous Sonic Team? This game would surely tarnish Sonic Team's reputation greatly! This game proved to be nothing great and special, as its graphics are only nearly three-dimensional, and no adventure was involved. Only puzzles, puzzles, and more puzzles! Mice, cats, rockets, arrows, dimensional holes...you can name them all, and they are the only components to this weird game! What can Sonic and Dreamcast fans like us expect on such an old-fashioned game like Chu Chu Rocket? Sonic Team is really doomed...

On the release date of Chu Chu Rocket, the tables began to turn. Chu Chu Rocket sales shot up to the top in Japan, making it as one of the best selling games for the week. A game that would surely tarnish Sonic Team and Sega's reputation has proven otherwise to bring in cash for them instead! Yuji Naka must be smirking secretly, knowing that his creation was actually original right from the start. So, a game like this actually managed to grab some fame in Japan?

Basically, the game is made up of a few components, unlike Sonic Adventure which is made up of many huge components. This game is simple and easy to play. You get to see mice, cats and rockets. What do you have to do, since this is a puzzle game? Simple, as what toddlers would expect: send all the mice into the rockets safely, that's all. Sounds easy? Go and try it for yourself and see whether it's kid's stuff or a brain baffler.

In the game, there will be a group of mice and sometimes one or two mice only. Their main objective is to reach the rocket safely without any harm. They have a serious problem: they can't control their movement. You are the only person who can control them. That brings us to the next point: they can't move sideways and backwards, only forward. Sounds crazy? Well, sometimes walking forwards will bring you to your goal much faster than any other direction. You need to use arrow palettes to change the direction of the mice, or Chu Chu as they are called, so that they will reach the rocket safely in the correct direction. As you advance into the next level, it gets tougher. Cats begin to appear, and dimensional holes are pitted all over the game floor. Your task seems to become even more harder, and you begin to blame Sonic Team for providing such tough puzzles that require you to skip your meals just to solve them.

After completing 25 levels, is that all? The game's finally all over, and you have wasted your daily's allowance worth of that game. Was it wise to buy a game that has only 25 levels? Now, you better read every word carefully. At the end of the credits, a Chu Chu will inform you to advance to the next difficulty. That means another 25 levels! After those 25 levels, the Chu Chu will allow you to advance to the last batch of puzzles, which are very tough to solve. After completing all 75 levels, there is nothing left, isn't it? Wrong! There are a few choices you can choose. Team battle, competition, internet gameplay, there is more to come!

In team battle and competition, you have the exclusive rights to gain as many Chu Chus into your rockets. The game takes place on a normal battlefield, with some Chu Chu and cat generators, and maybe a few walls. Your assigned rocket is positioned at a part of the battlefield, while your opponents' are placed at other parts. What do you do? At the start of the game, Chu Chus and cats will start to come out of the generators and walk in a forward manner. If you are familiar with the game, you can calculate where to put your choice of arrow palettes to direct the Chu Chus into your rocket and even sabotage your opponents by directing the cats to their rockets instead! Chu Chus boost your score, while cats lower your score drastically. A normal cat can reduce as much as two-fifth of your total Chu Chu score if it enters your rocket.

During the game, there will be question-marked Chu Chus flowing out of the generator. What happens if it enters your rocket? A scroll panel will appear in the screen and display the bonus or penalty that you will get. If you get Chu Chu Fever, it's time to grab all the Chu Chus that will flow out of the generator endlessly. It's very fun too! What happens if you get Neko (cat) Fever? You better be chasing those cats out of the way since only four cats will dominate the battlefield at that time. Sometimes, the rockets in the battlefield will switch positions with each other, while sometimes you get a few seconds' grace to position your arrows anywhere you like. There are times when you get a Speed Up or a Speed Down, and the situation will determine whether what you get is a bonus or a penalty. If you get a particular bonus, you will be able to direct all the Chu Chus that come out of the generator directly into your rocket for a few seconds without any problem! If you get! another particular bonus, you will be able to make cats jump into your opponents' rockets, thus sabotaging them! It's great fun, and it gets really hilarious at times! Watch your opponents' faces when cats stumble into their rockets! They will frown and squeal in disappointment while you emerge in triumph, but don't be too cocky yet, because you are given three minutes to play, and a second may create a tremendous change in the outcome at the last moment.

So, Chu Chu Rocket sounds fun, doesn't it? That gives us only one conclusion: Sonic Team produces the best games for Sega, so don't ever doubt them. Grab them as fast as you can before they are all sold out! Happy reading!