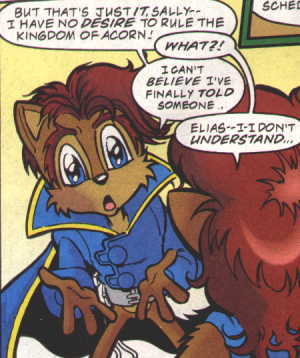 Well... we seem to be coming to a crossroads here. Only trouble is that we have no idea which road is the one we're traveling on next.

Life is not as it should be on our beloved Mobius. (But then again, when WAS it ever as it should be?) The Eggman cometh, Sonic's gone extreme, Knuckles has opened his heart to someone. Yet somehow, one member of our group seems to have been lost in the shuffle. That someone is Princess Sally.

Bear in mind, of course, that this isn't the first time she's been on the shelf. Hey, she was supposed to make a permanent home on said shelf, remember? (Apologies, but I side with Dan Drazen on that one. There's no way this fanboy's gonna get over Endgame.) But this time is different than before. Sally has been forced onto the sidelines in order to allow someone else to pull her strings. Usually, that someone comes in one of two shapes: Her father, King Acorn, or the corporate suits at Archie and SEGA.

This goes back to the issues I first touched upon at the time of "The Ultimatum" in Sonic #60. The problem stemmed from the fact that King Acorn was saying that Sally has to marry Antoine in order to become the next to rule. We've seen since then that she didn't handle this too well, so as a counterattack, King Acorn sent Geoffrey St. John and his specially-created Secret Service to go to the Floating Island in order to find Prince Elias. The mission proved successful, and the Prince was brought back to Mobotropolis, where he was INSTANTLY proclaimed as the next to ascend the throne.

All this occurred behind Sally's back, as King Acorn had her detained on other "royal duties". Sure, Kingie, whatever you say. This sounds more to me like a "royal screw job". I mean, let's see, you try to force her into a marriage she doesn't want, you keep secrets from her, you disband the Freedom Fighters just so you can keep her under your complete control... And you say that you're doing all these things because you love your daughter. Well, frankly, this type of "love" stinks! (I can hear the J. Geils Band brushing the cobwebs off their instruments as we speak.")

But you want to know the best part of all of this is? We're not done yet, because the thing that started all this trouble -- Sally's relationships -- has just re-emerged thanks to some major curves.

WARNING: SPOILERS AHEAD! TURN BACK IF YOU DON'T WANT TO KNOW! 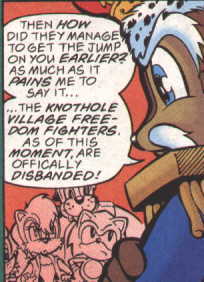 At first, we figured that with Elias placed at the #1 contender to the title of ruler without having even been in a single contest, Sally (screwed as she was) could just spend the rest of eternity with Sonic as it was meant to be. But then, Elias pulls a James Van Der Beek, telling Sally that he afraid to say to dad "I don't want your life." To top that, Sonic Super Special #11 will feature Sally undergoing the ritual that she first refused to take part in.

So wait a second. Does that mean that Sally's gonna drop Sonic just like she was dropped from a building and suddenly spark a romantic fire with Antoine in the name of the Source of All? Not just yet...

Because it's been previewed that in Sonic #78, King Acorn is finally going to be shining the spotlight on someone other than himself for a change. It turns out that he's establishing the Kingdom of Knothole, he's putting the Freedom Fighters back together, and to top that off, HE'S KNIGHTING SONIC!! Yes, you heard me right. Sir Sonic of the Kingdom of Knothole. Has an odd sound to it, doesn't it?

Well, realize that THIS is where the confusion comes in. The question now before the panel is: WHO WILL SALLY CHOOSE AS HER KING?

This question stems from the comments I made in the editorial I did about "The Ultimatum". (See Ken's Ultimatum) I had said that it is tradition -- if not a mandate -- for someone of royalty to marry to another of royal blood. So, it made sense that Antoine was the one that the Source of All would pick. But now, with Sonic being accepted into the fold, he becomes a contender. Thus, it opens the possiblility that the future scenario shown in Sonic: In Your Face will indeed come true.

HOWEVER, even with those at Archie hoping to shine some hope and say that our dreams may come true, we still have to contend with the Vince McMahon's of the comic world, the corporate suits at SEGA. We always have to keep in mind their "No Chance In Hell" policy: Sonic & Sally will NEVER get married, get engaged, go out on a date, or show any other sign of a love relationship. So, if you asked them who Sally is going to end up with, their resounding answer would be Antoine. However, Ken Penders has always made it clear to all of us that if our hearts are set on something, and we make it known, SEGA may be mysteriously convinced to change their minds. Therefore, we the members of Sonic fandom have the chance to be a variant of Stone Cold Steve Austin. If we raise some hell and let our voices be heard, we'll have our way.

But in a world where nothing is for sure, we'll just have to accept the fact that we won't know what the future holds. And that's why we're so confused.

Thank you for your time. I am