So what does the regular joe think about current Archie situations? Submitted by Kamal Bhatti, comes a simple editorial that gives his honest opinion on recent happenings in the comics, what he thinks it needs and what he wants to see. Give it a peek and tell us in two or three paragraphs what you want and whether you agree with him. 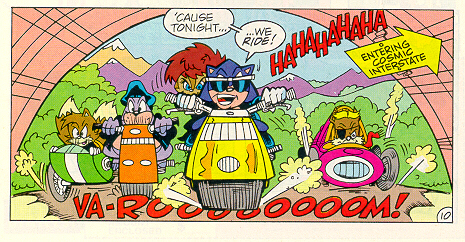 My opinion on the comics? Well, It's not that I hate it...It just needs to be improved big time. A love triangle with Sonic, Sally and Amy I would rather enjoy. I dont care much for Nate Morgan or Rotor, they can both get robotisized for all I care, along with Sally and her annoying family too (after her and Amy fight over Sonic of course, hehe).

As far as Knuckles goes.....I dont like the way he's portrayed in the comic, it makes me appreciate him less. His personality's all wrong, and they didn't even give him a cool jamacian accent like he's suppose to have, I mean they give Antoine his french accent, and give a few other characters an australian accent, why not Knuckles with a jamacian accent, thats the way he originally was back in the Sonic 3 and Sonic and Knuckles games.

And Y'know, the plot is no way nearly as good as it has potential to be. Personally, to accomidate Sonic's new look....uhh......well, they really shouldve just skipped ahead a few yrs, so he would be older and he wouldve just grown into his new look, instead of that stupid freak accident in that one issue......and the same goes for Amy, with her getting older, they couldve done that in a better way too. They also shouldn't try to include the plot of the video games and such with there plot, it makes it dull. They should try to fit in the characters from the games that surve a purpose in the plot, but not the video game plot itself. I mean that "Endgame" saga was original, not based off anything, and I still enjoy it even today. I would also like to see more humor, Mike Gallagher humor to be exact. Oh well, thats all i really have to say about the plot. The artwork is also in need of improvement. It isnt as good as it used to be, thier older style was better. Well that concludes this editorial/opinion essay. Thank you.