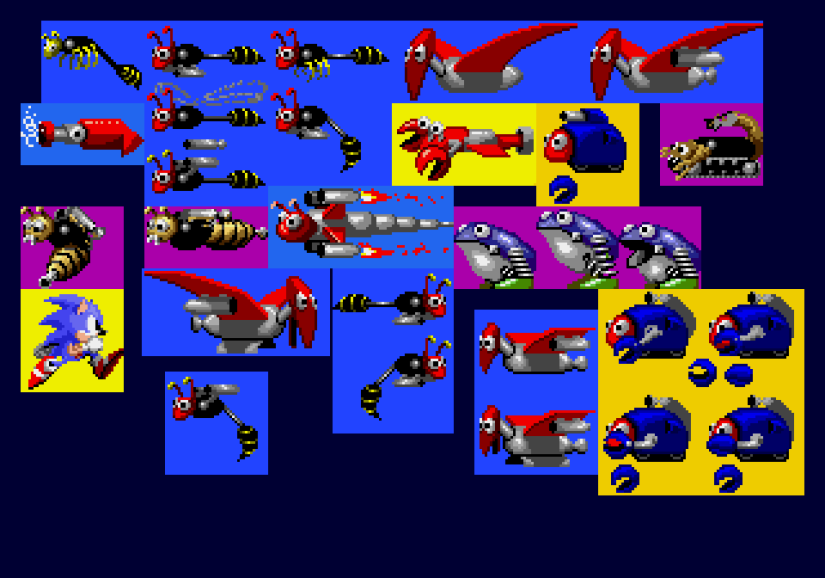 Throughout the many years since Sonic 2 was released we have gotten little details into the development of the game and very interesting info about scrapped portions and assets. Very notably the time travel mechanic as seen in Sonic CD was once going to be in Sonic 2. Now thanks to MegaBites Blog we have new info on unseen badniks, unreleased Mega Drive/Genesis games and GENOCIDE CITY ZONE. Where did this info come from? Jason Moorhouse (the owner of California-based retro video game store, Nostalgia Alley) met with Sonic 2 Level Artist Tom Payne at a garage sale and got a box full of Genesis era development leftovers.

Jason: He had one small box of stuff left from his days at Sega and LucasArts including paper design specs of level lay outs, character designs, floppy disks with lables that read ‘B-Bomb’ and ‘Sonic Enemies’ among others, CD-Rs of the game ‘Yoda Stories’, a SNES prototype of ‘Big Sky Trooper’, a few awards he was given while at Sega, employee jackets and enamel pins. He gave me a few of these items including all the floppy disks, the ‘Big Sky Trooper’ prototype, Yoda Stories CD-Rs, and one of the awards from his work on ‘Sonic Spinball’.

That's just a little snippet of the information revealed. If this kind of stuff interests you, you can see more pictures and info at MegaBitesBlog .