Never Judge A Furry By Its Cover!

An editorial on the miserably failed Sonic Love Showdown Poll that questioned who would make the better girlfriend Amy Rose or Sally Acorn! Needless to say its a good editorial, but the poll itself started from unabashedly flawed concepts... 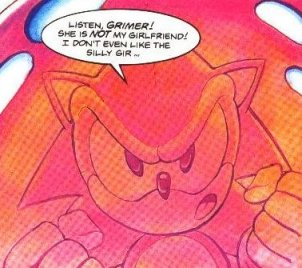 Before I get down to the real nitty-gritty of this editorial, I hope that people`ll bear with me whilst I explain that this is merely a fleshed out reply to a discussion that WB and I were having on the Forum, and it`s largely going to be structured around a post featuring within that thread. I thought that it would be easier to mount my argument if people could see what I was arguing with. And I hope that people will agree with me.

So, without further ado...

With all due respect, WB, that aim, although it makes sense, is largely academic when viewed in the context that you placed it in. If the point was not a simple "Which is better? Choose" scenario, then the question should not have been phrased as such:

WB: It isnt a matter of continuity. Thats what I didnt want it to be percieved as. Its more of a matter of just "Who do you think whould be better?" No deep continuity related movements. No serious psychological though as to why Amy was previously deemed a tagalong/ditz and Sally was a controlling scene stealer or however some people see it. Its just a simple no holds barred - "What would you like to see, what do you think question." 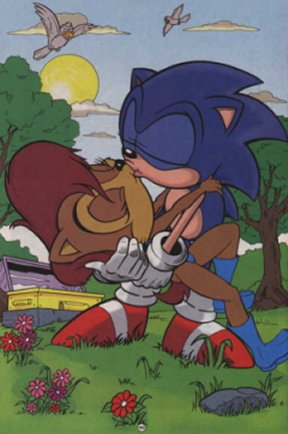 But that`s the one thing that it categorically could NOT be. How could it? Although I can see that you`re trying to universalise the Sonicverse, the poll was loaded from the start. It looks as though we`re back to my trusty pet peeve of factionalising. I could easily base the whole argument around that few sentences, but I have a whole editorial to spin out...Amy, for instance, isn`t a tagalong ditz in Fleetway - she`s a `Girl Power` fanatic. Most Fleetway fans are probably too young to`ve anything more than vaguely heard of Sally (since SatAM hasn`t been shown in Britain in any form for over six years now) and therefore probably couldn`t give two hoots for her.

WB: Someting to try to make you think, but without overanalyzing.

Please define how we can over-analyse in that particular context, where the question itself seems under-analysed. We can`t think if we don`t know exactly what we`re supposed to be thinking about.

WB: See what I mean sorta? You asked for a straight choice and I'm asking you to look at it from ALL angles and not just the straight choice one. Think of Sally's development in Archie Sonic and SatAM. She's relatively different in the two in some aspects. And Amy is different in SegaSonic and Archie. I'm not asking you to debate. Just think of how each is portrayed in thier own universes and who you think is better.

Yes, they`re both different. Very different. Therefore, there`s no way that we could rationally be expected to choose between `Amy` and `Sally`, because nobody would be quite sure exactly which version of whichever character you were talking about. There are different versions of both characters, yet the poll still came down to a rather monlithic `Amy` versus `Sally`. You say that you were asking, "Who do you think would be better?", but we didn`t even know for sure who we were voting for.

You can`t make a silk purse from a sow`s ear or a straight answer from a crooked question. It would have been much fairer to offer the following choices:

But no. And I`d be willing to bet that quite a few torn loyalties resulted, from people who preferred one version of a character but hated another, and might not have voted quite as truly as they would`ve done if given a broader choice. If we`re asking how each is portrayed in their own universes, then to not allow us to choose beween universes in the poll itself defeated the object. Okay. Even if we`re supposed to look at them within their own contexts, then there`re still a couple of itsy-bitsy details that prevent a faithful result.

Which universe are we pairing this fantasy couple in? And with which Sonic? After all, there`re different version of him, too, who would certainly pair off better with one character than the other. Archie`s Sonic and Sally are a fairly good match, whilst even in her SA adaptation incarnation, Amy`s a ridiculously immature little (I`ve baulked at using this phrase before now, but I`ve read a lot more Archie since then) whiny brat who really should put that new outfit and make-up back in her Mommy`s dressing-up box and stop trying to play with the big kids. Fleetway`s Amy is more of a mother/sister figure. Sega`s Sonic is simply not interested in girls (hence Sega`s Amy has to chase him), whilst, for all he`s matured a good deal recently, if Fleetway`s gung-ho, chauvanistic, egomaniacal idiot hedgehog ever found a girl who`d give him the time of day, it`d be a damn miracle. Fleetway`s Amy tolerates him, and any incarnation of Sally would pitch a fit. I wouldn`t wish him on either girl. It would have taken a little more space, but there should`ve been the above options for the girls, and a choice to pair each of the girls with:
Sega Sonic
Archie Sonic
Fleetway Sonic

That way, you would`ve been able to see a much broader view of which version of which character was preferred with who. As it was, everyone just got totally foxed. But I`m digressing. My personal view on the `Amy versus Sally` debate - in ANY continuity - is a whole other editorial. Do you see what I`m driving at? There was honestly no way to separate the choices that you were giving us. You say that continuity and psychoanalysing the characters should have been irrelevant, but as far as I`m concerned, it was the crux of the whole issue. We couldn`t look at it "from all angles" if you were only letting us look at it from one, and we couldn`t vote for choices that weren`t there.

WB: And then when the poll is finished I will ask people to explain why and THEN feel free to rant and debate about the similarities/differences in the two and then let them come to a broader conclusion about who or what exactly makes a good girlfriend for Sonic as a person, not defineable on continuity alone.

Again, which Sonic are we talking about? He`s lots of different people. And there aren`t only two girls on offer here - there`re at least five. What makes a good girlfriend for Sonic may not actually be either of the two options available, but continuity (or rather, the lack of it) was the key issue in the poll as it was written. The conclusion should have been broad, but the issue itself was far too narrow. Without relating the poll to personality or continuity concerns, what are you trying to say? I`m afraid that, if we`re being asked to choose which was the "better" of the two without looking at their various incarnations, it looks horribly as though you`re playing right into the paws of the furry fanboys, and asking us to judge which of the two would make a "better" girlfriend on the basis of looks alone. I should hope that most of the HQ wasn`t that shallow when voting, and I know damn well that you`re not. It was just a case of some very bad semantics, but that was how it looked. There`s no other viable way to compare the two: their images are the only constant.

Again, I`m not trying to hold any particular position or belittle the poll`s good intentions. It was a worthy effort, but fatally flawed.