Feb 7, 2005 by Swifthom
Share
A quick editorial introducing what is Sonic the Comic so anyone who doesn't know anything about the comic can get a quick overview in just under 2 pages of information. 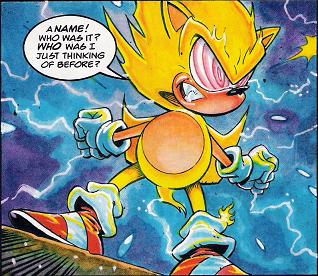 Part 1: What is Fleetway
Remember the old story about Dr Kintobor turning into Robotnik and Sonic getting his speed through the ROCC. The charming quintessential story that Sega of America used to bandy around until the late 1990â€™s when Sega suddenly decided to take things seriously. Remember the furious debates about weather to call Sonicâ€™s world Mobius or Earth? Actually, that debates still going on, every now and then someone who hasnâ€™t seen a Sonic game for ten years turns up and says, â€œHang on, what happened to Mobius?â€
Fleetway is a comic that spawned from that story, it was created by Egmont Fleetway .Ltd and published right across western Europe (at least for a while). The comic ran for 223 issues, was published every fortnight and featured on average 4 strips featuring famous video game characterâ€™s fight it out. At first it wasnâ€™t just Sonic, old video game favourites such as Golden Axe, Wonder Kid, Decap Attack and Shinobi joined Sonic but popularity for these waned all except for Decap Attack which ran strong throughout the comicâ€™s historyâ€¦ Of course, this being a Sonic site we arenâ€™t interested in them, good as they were.
Sonic the Comic (or STC abbreviated) ran for 223 issues and featured a look in on every major Sonic game between the original Mega Drive (Sega Genesis all the Americans reading this,) and Sonic Adventure. The stories featured Sonic, Tails and Amy, joined by Porker Lewis and Johnny Lightfoot (originally based on the pig and rabbit of the old 2D Sonic games) and eventually more characters to join the fight against Doctor Robotnik and his assistant Grimer (a much more civilised version of Snively from the Archie comics.) Unfortunately Sega lost interest in the comic and it fell into repeats around issue 185, before finally ending nearly 40 issues later.

Part 2: Where can I get it?
Aha, hereâ€™s where I have to disappoint you folks. As I said the comicâ€™s no longer in commission, and hasnâ€™t been for a good few years now. As a rule if youâ€™re in America Iâ€™ll just say, â€œYou canâ€™t,â€ if youâ€™re in the UK then itâ€™s â€œVery very very unlikely.â€
Scans of the comic are being collected online in certain websites, look around and you will find, however so far no-one has come close to collecting a complete look at Fleetway. Sonic HQ has a strict policy on not hosting entire issues so you wonâ€™t find them here, but what you will find here very shortly is a brand new archive, similar to what we have on the Archie section, an Encyclopaedia of characters and a host of memorable pictures for your pleasure. If itâ€™s not online already itâ€™s coming soonâ€¦ 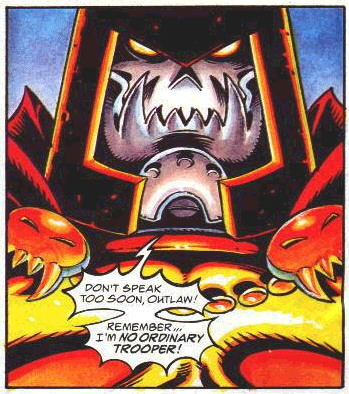 Part 3: The Story?
As I mentioned above Fleetwayâ€™s Story was originally based on the ROCC story about Kintobor, set on Mobius and so on and so forth. Actually, it took an entire 8 issues before it brought up that plot, but that story ran from day one all the way through till the end. Within 10 issues Doctor Robotnik succeeds in conquering all of Mobius and Sonic is trapped, sent forward in time 6 months and has to start a rebellion against the mad dictator, itâ€™s like Satam without Sally, Bunnie, Rotor and Antoine.
In the course of defeating Robotnik Sonic and the freedom fighters go through many strange and exotic adventures and meet many strange and exotic people. The comic took a different course to showing the Floating Islands heritage than Archie did, this time Knuckles really is the last Echidna, except one, although he does goes on a personal quest to learn more about his ancestors. Tails originally comes from the Nameless Zone, a magical land of swords and sorcery, and Troggs! Later on in its course Sonic would travel to the Special Zone and meet the Chaotix crew and his number one enemy would change from Robotnik back to himself, Super Sonic gone evil. When he returns the comic changes pace, banishing Robotnik to Flickies Island and unveiling the evil and mysterious Drakon Empire who want the Chaos Emeralds backâ€¦ The comic travels to other planets and other universes as Amy and Tekno explore the universe and Sonic shrinks himself down to the size of an atom to take on the lost world of Shanazar. In its short run the comic did everything imaginable, it still stands as an amazing feat of gigantic proportions among Sonic lore, although sadly it has been almost forgotten.

Part 4: Iâ€™m tired of Archie, is it better than that rubbish?
Firstly, Archie isnâ€™t rubbish, itâ€™s just different. Secondly, I canâ€™t say. My personal preference is â€œyes,â€ but then Iâ€™m biased arenâ€™t I. There are very few people who have read enough of either to be able to give a good response, if you want to know more try asking around for them in the Mobius Forum, theyâ€™ll be glad to share their opinions with you.
Fleetway always had a trouble deciding what age range it was aimed at, some comics are worthy of a two year old whilst others feature Mental breakdowns and genocide, pretty strong stuff for a kiddies comic. In short Iâ€™d say thereâ€™s something for everyone, but bits will either go over your head or make you cringe, cringe VERY VERY badly. When it was good it was great, but when it wasnâ€™t it sunk lower than a submarine.

Part 5: Havenâ€™t I seen this somewhere before?
Possibly, there have been a few references to STC in recent years. Possibly the most controversial, at least among the STC fan base was the upcoming artist, Jonathan Gray (once a member of this very site), drew in some characters in his debut issue 134. Unfortunately some hardcore members of the STC fan base cased such a row that the artist seems to of gone of the idea of repeating the act, a shame but there you go.
STC is still alive, sort of in an ongoing fan comic called STC Online. The comic is extremely professional and has the support of some off the comicâ€™s original creators, however I must stress it is a FAN comic, not an official comic. This is not REAL STC. If you read it and then come back to Sonic HQ and point out that our encyclopaedia is short then donâ€™t expect a reply.
Alternatively you might have seen the comicâ€™s perfect pair, Nigel Kitching and Richard Elson, one of the best writers/artists to grace the Sonic community working for 2000AD. They recently finished a series called A.H.A.B for the comic and who knows what they are working on now.
Lastly, if you have seen some scans of the comic about the net but didnâ€™t realise then good for you. We canâ€™t host everything here and there is so much to see in the comic so it really should be worth your time to look out there on the internet and see if you can discover more. If you want to know more then the HQ is working on an archive and encyclopaedia for the comic. Myself, Samanfur and Sam Cyber Cat (the 3 HQ Fleetway staff) are working together on the siteâ€™s Fleetway sections to bring it up to date with the other seriesâ€¦
Weâ€™re glad to bring you the opportunity to learn more about one of the Sonic Communities lost gems.