Current Developments In The Sonic Comic

Sonic fan Brian Sapinski brings up the question as to WHY there are so many unending questions in the Sonic comic.

Sonic fan Brian Sapinski brings up the question as to WHY there are so many unending questions in the Sonic comic. 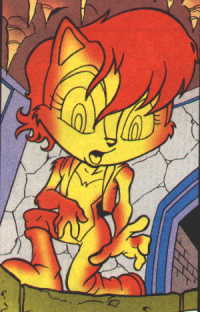 OK. Ever have it happen where you thought you would finally get the answer to a nailbiting question, only to have it lead to more questions?

Well, that's just happened to me.

This editorial is a follow-up to my last one: Royalty Blues. Since that commentary, two major events have gone down to answer the puzzle of who will ascend the throne of Mobius with Sally. Those events, however, have left things rather unclear.

First, we saw in Sonic #77 that King Acorn has suddenly turned face toward Sonic. Where the two were once at odds, our King now takes back everything that he held against Sonic, and is preparing to knight him in the newly-sanctioned Kingdom of Knothole in Sonic #78.

To add to this, we witness what I had been waiting for over the past 5 months: The Girls Rule Special, wherein Sally undergoes the rite to bond with the Source of All in order to be the next to ascend the throne. Finally, the question would be answered: Who will the Source of All choose for Sally as her King?

Unfortunately, here's where we're left in the cold. Sally doesn't complete the ritual. Instead, she opts to find her own path to the throne.

This has now left me very confused, since Ken Penders decided not to answer my question clearly. And it's not the first time I've seen or felt this type of confusion. Anybody remember this example from the movie CLUE:

Colonel Mustard: All right, look, pay attention, everybody. Wadsworth, am I right in thinking there is nobody else in this house?
Wadsworth: No.
CM: Then there IS someone else in this house.
W: No, sorry, I said no meaning yes.
CM: No meaning yes... Look I want a straight answer. Is there someone else or isn't there? Yes or no?
W: No.
CM: "No, there IS", or "No, there ISN'T"?
W: Yes.
Mrs. White: (breaking her glass over the mantle) PLEASE!!!

(After everyone argues about the motorist still in the lounge)

CM: Well, there is still some confusion as to whether or not there is anybody else in this house.
W: I told you, there isn't!
CM: There isn't any confusion or there isn't anybody else?
W: Either... or both.
CM: Just give me a clear answer!
W: Certainly... (clears his throat) what was the question?
CM: IS THERE ANYBODY ELSE IN THE HOUSE?!
All: NO!!!

See what I mean? Ken didn't answer the question straight the first time, and now I'm so confused that he forgot the question by the time I got my bearings straight. NOW, I have new questions based on the events in "Ascensions" and events to come. They are based on these 3 issues.

Issue #1: The ritual. It took place before Sonic #74, which is the only time that it could have happened, given that Eggman/Robotnik has overtaken the kingdom again, and it's just after Elias told his sister about his intentions. During the ritual, we discover that Sally's chosen one would be SONIC! (A reason I'm personally steamed the ritual was not completed.) Also of note: The spirits of King Acorn, Elias & the future Sally meet with Sally in the pool, in order for her to understand the Source, and take the next step in completing the rite. So now that she backed out, the answer I wanted escaped me.

Issue #2: King Acorn's "All For Sonic" turn. Sudden? No kidding. Deserved? You betcha. The reasons for this change of heart? Consider this logic. King Max is one with the Source. Thus, he knows when anyone is trying to bond with it. Even though Sally took the rite behind his back, he would know that she was doing it. This explains why he appeared to Sally in the pool. At the same time, it means that he could also see the future that Sally saw: The one with SONIC - not Antoine - as her King. That fact alone means that King Max knows that Sonic's making it to the throne. Heck, maybe it's even because of that knowledge that Max is KNIGHTING the guy in Sonic #78. And even though Sally did not complete the rite, King Max still knows Sally's thoughts and the future she wishes for because of the length of the ritual that she DID go through. Therefore, because the Source says so, he now accepts Sonic with open arms. But because the rite wasn't finished, does that mean that Antoine is still first in Max's mind? Or is he still thinking to put Elias in the hot seat?

Issue #3: Amy Rose. Thanks to the magic of preview material again, Amy Rose will use Sonic #79 as her chance to adapt into her Sonic Adventure self. However, to do this, she takes the super emerald that is keeping Queen Alicia's life support going and draws all its power. This turns her into her older-looking self from the game. Two things happen as a result. First, Amy Rose is now a new contender in the love wars, because she can finally try for Sonic's affections since she's on the same age level with him now. Second, her drawing from the emerald puts Queen Alicia on the critical list, and that's probably not gonna make the Acorn family happy, especially Sally. Hey, now this could lead to one of the biggest catfights this side of ECW's Beulah & Francine. (But since furries wear little clothes if any, this one could be much more painful.)

So where we thought we would get our final answer to all this royalty and relationship stuff, we just get another pro-wrestling finish where the answer won't come until later. Now I know that part of the reason for this is because of SEGA's influence on Ken Penders, Karl Bollers, and all the rest of the Archie bunch (or at least I wouldn't be surprised). But this has all just reached a point where maybes just don't satisfy me any more. Please Ken, I beg of you now. I don't care if you guys never get to bring the angle any further, but once and for all, JUST GIVE ME A CLEAR ANSWER!!

And DON'T forget what the question was.

Thank you for your time. I am